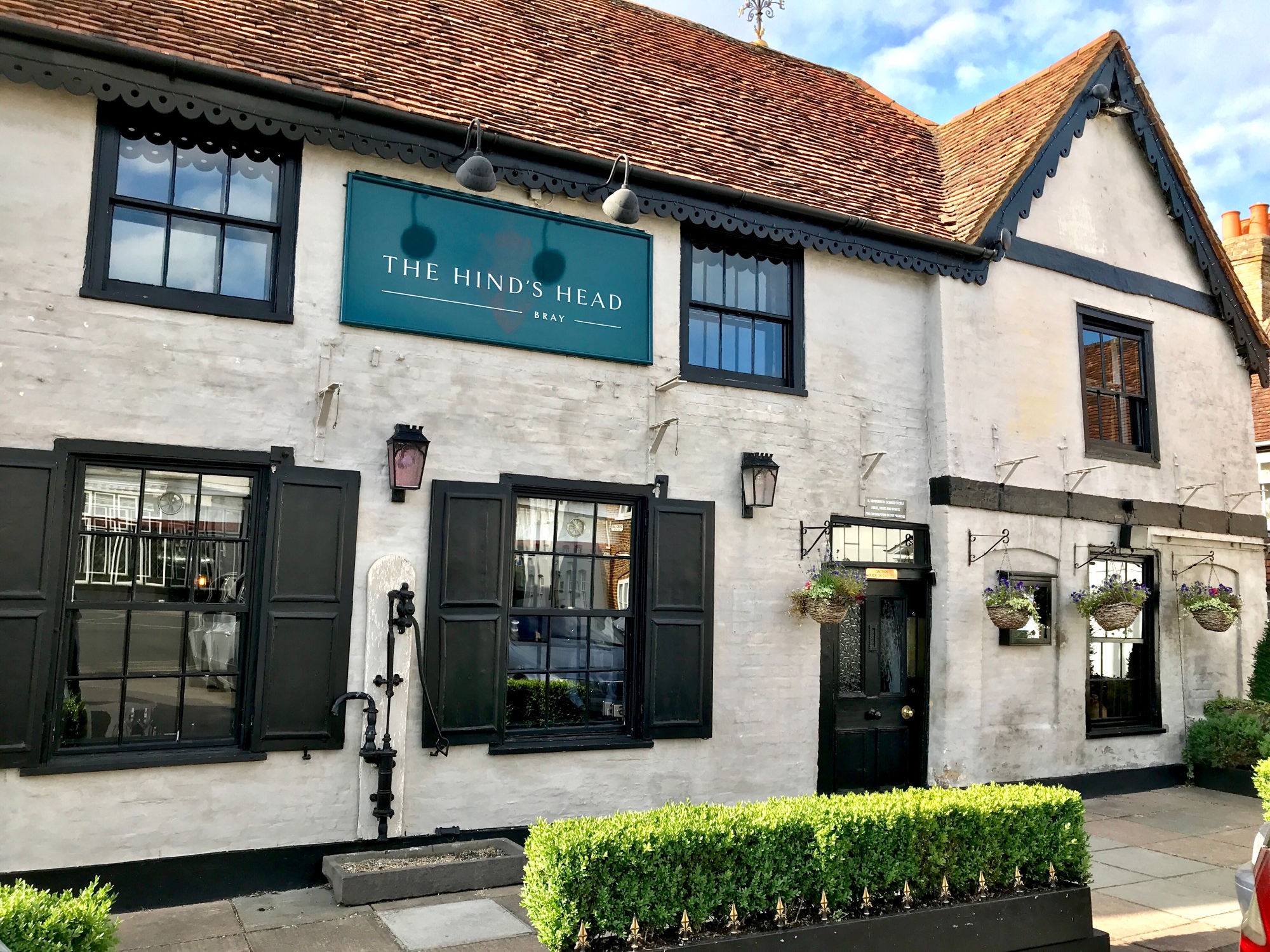 The Hinds Head is in Bray, a small village near Maidenhead. It has beautiful scenery that surrounds  residential homes and restaurants. Owned by Chef Heston Blumenthal, and was awarded a Michelin star in 2013.

We were lucky enough to get parking right outside the pub as we booked dinner early. The pub was originally a hunting lodge and coaching inn dating back to the 1400’s. It is a quaint Tudor pub with wooden beam ceilings which has a truly traditional British feel. It has kept its character and stands perfectly within its surroundings.

We were greeted with a warm and welcoming smile and we were led to our table. Our table was by the window, it was nice to have natural light seeping through, as the restaurant had low lighting – this added to the ambience of the restaurant.

We felt we had a lot of privacy as we booked early and there was plenty of space between tables.

Our waiters were Emma and Robyn – both friendly and welcoming and went above and beyond for our needs. I booked our table in advance and requested a birthday plate as it was my Dad’s birthday. Emma bought a card over and gave it to my dad which I thought was such a kind gesture – I cannot fault the service. Emma talked us through the A La Carte menu and the specials that evening – we opted for the choices in the a la carte as it sounded more appealing.

My Dad chose the Pea & Ham Soup as a starter – it was light and tasty; a great palette cleanser to start the meal with.

My Mum chose the Wild Mushroom on Toast as her starter, it had a lot of flavour, fresh with the right amount of seasoning.

My sister chose the Scotch Egg as an appetizer as she had read reviews online that it was a must try! It was cooked to perfection; a succulent crispy outside and an oozing yolk middle, with mustard mayonnaise on the side. Her main starter was the Powdered Duck Ham – amazing flavour with the sweetness coming from the tomatoes combined with the tenderised duck salad worked perfectly as a light starter. 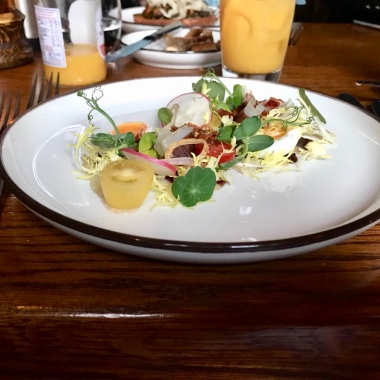 I also chose the Scotch Egg, and a main starter Earl Grey Tea Smoked Salmon – most of you may know I’m not a fan of cucumber but I thought I’d try it with this dish – it gave it an extra freshness to the flavour and worked well with the salmon – you can’t go wrong with smoked salmon on cream, it was a nice and light starter. 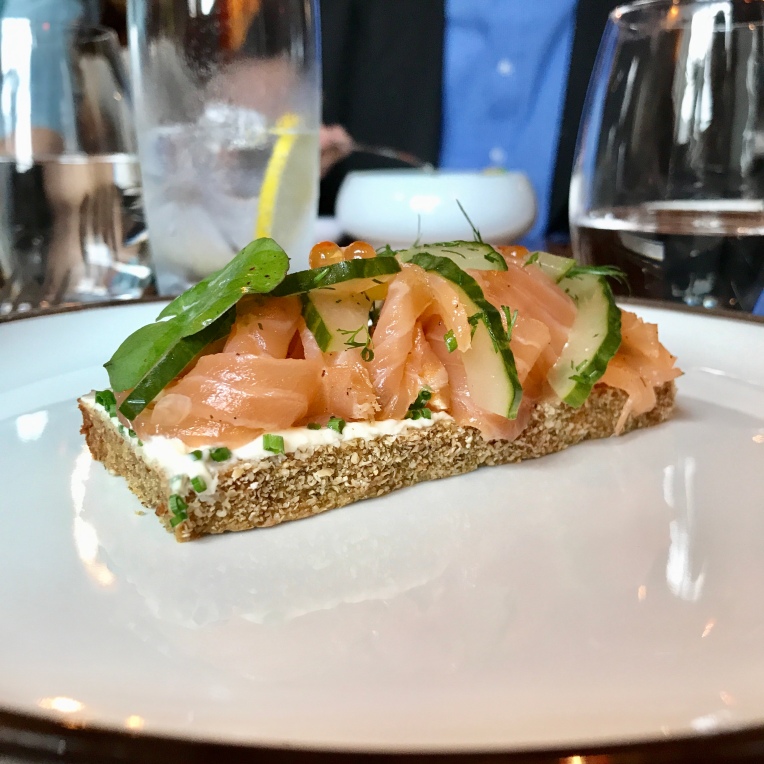 My Dad chose the 10z Hereford Rib Eye which came with steak sauce and French fries, he had requested a medium to well done steak – we all had a bite; it was the juiciest steak I have had in a long time, with the burst of flavour that rushed around my taste buds and filled my mouth with excitement! I have never seen my dad smile so much about food!

My Mum chose the roast Plaice – Girolles, pickled cucumber, brown shrimp and mustard cream, she was surprised how big the portion was – when I tried a bit of her plaice it instantly fell apart in my mouth, with the flow of creamy flavours dancing around my mouth. Superb!

My sister chose the Chicken Smoked Bacon with Grilled lettuce, broad beans and mint oils – slow cooked chicken, flavoursome, great presentation – personally I would never opt for chicken as most of the time the chicken is too dry and never is a good as mum’s home cooked chicken but when my sister gave me some and I was astounded by the tenderness and the flavour it was very juicy and tasty – a wonderful dish! 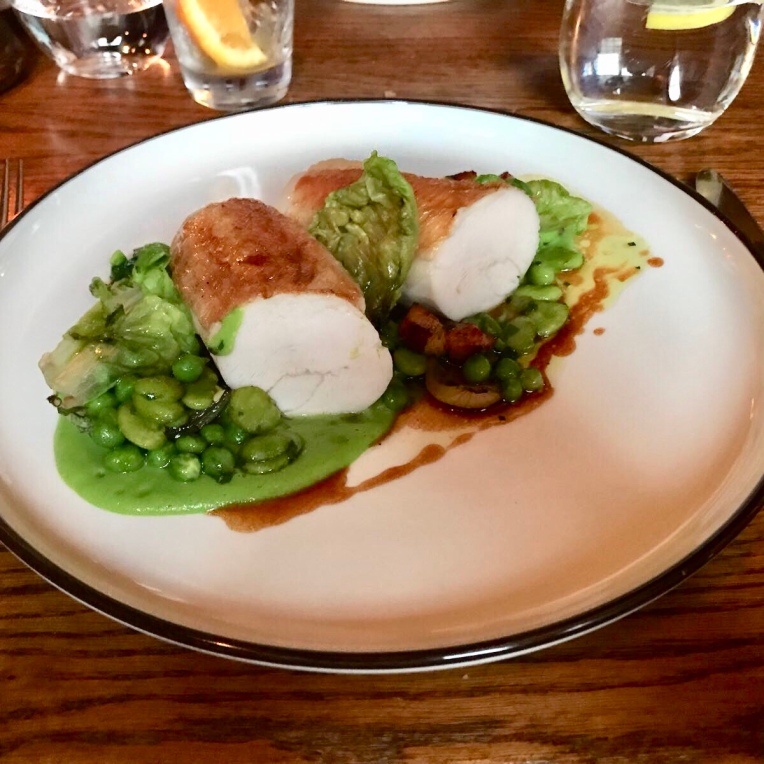 For my main I decided to choose the dish that was recommended by Emma. A traditional British dish – Oxtail & Kidney Pudding. I was informed that it wasn’t a dish you could easily get at most restaurants; it was packed with flavour – a rich gravy sauce flooded the pastry pie giving it a heavy texture which wrapped around the tenderised oxtail. I would recommend this dish for a cosy winter evening as it was a hearty dish! 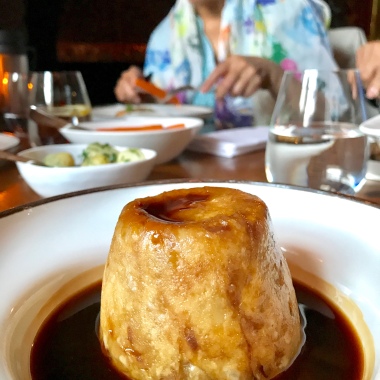 Robyn cleared our plates and asked whether we wanted to see the dessert menu, we all happily agreed. There was a nice selection of sweet treats including a cheese board selection.

I was torn between the Chocolate wine (millionaire shortbread) and the Raspberry Tart (Pistachio’s and Earl Grey ice cream), but in the end I chose the Raspberry Tart – I’m glad I opted for it as it was divine! A perfect portion size after a heavy main. The presentation was creative and eye catching, the flavour was amazing; with a refreshing fruity taste and the coolness from the ice cream, a great combination for a summer dessert. 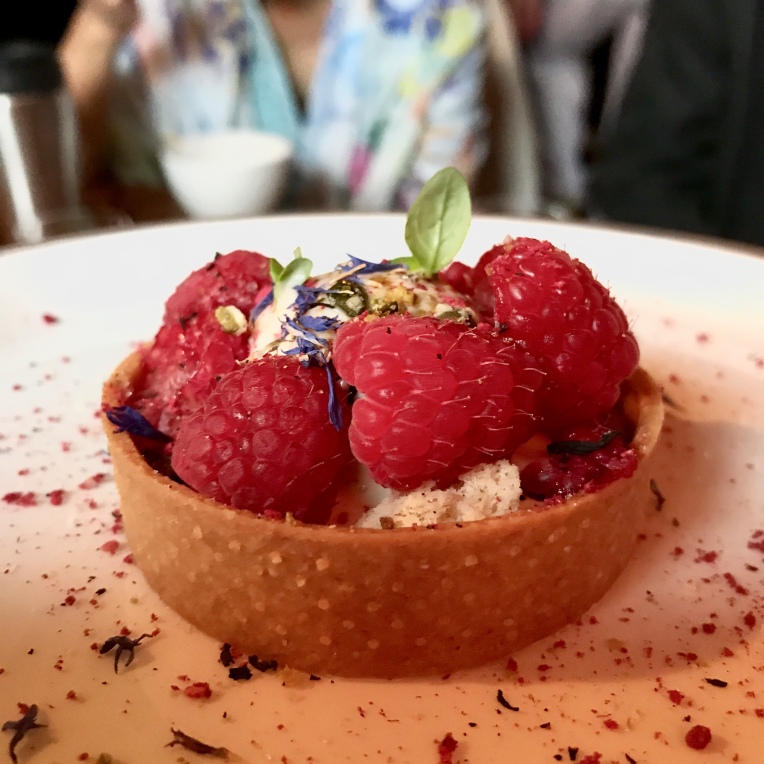 My sister chose the Quaking Pudding with cinnamon, nutmeg and compressed apple), a sweet and a light dessert which reminded me of panna cotta. The taste reminded me of egg tarts – a smooth texture that just melted in my mouth hitting all the right areas. 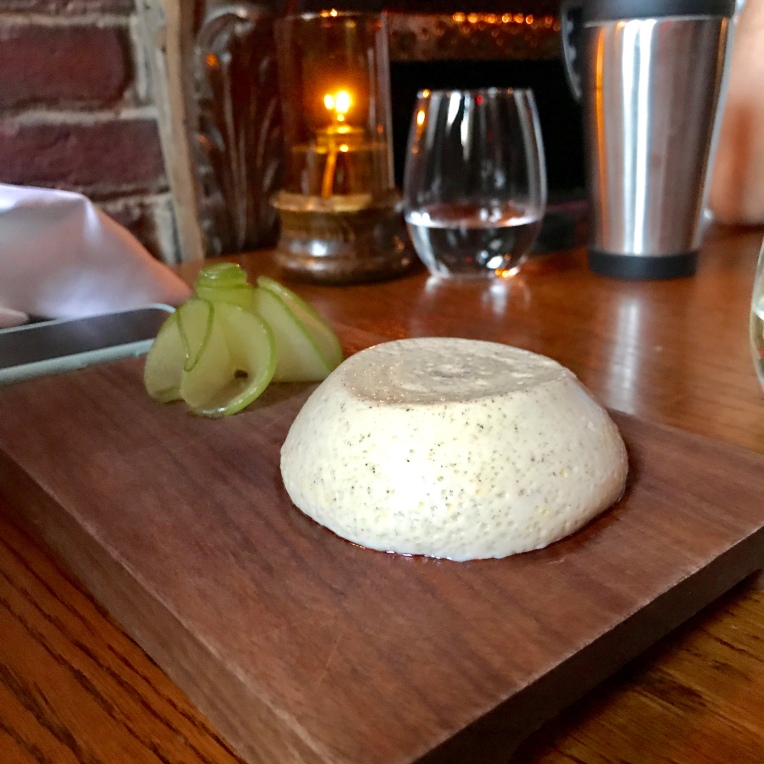 My Dad opted for two scoops of ice cream but didn’t finish it as they had bought out his birthday plate written in chocolate sauce, ‘Happy Birthday‘ and five dark chocolate ganache truffles. I’m not a fan of dark chocolate but these are an exception! The chocolate powdered ganache tasted heavenly melted on my tongue instantly with a balance of sweet and bitter taste. 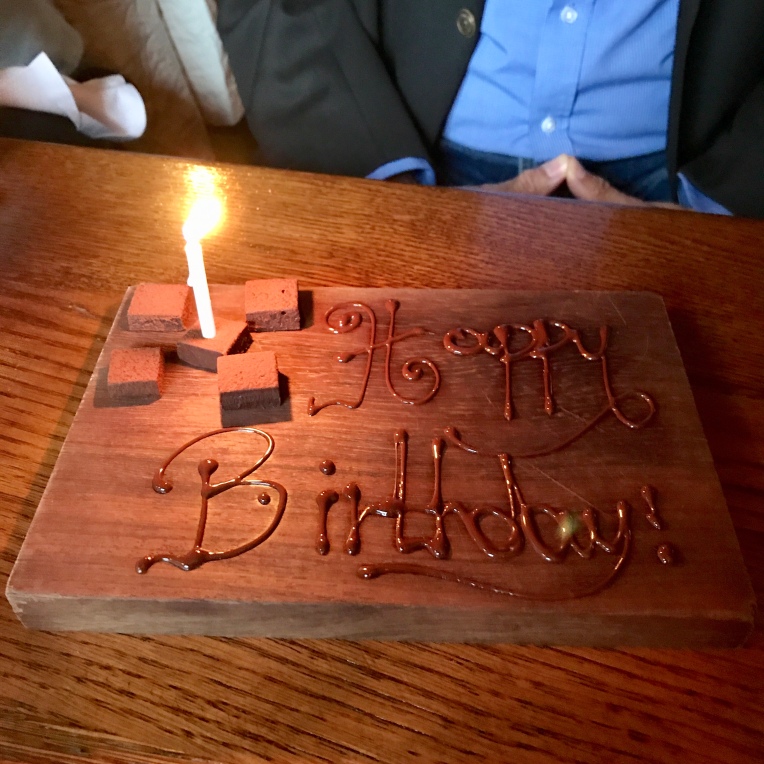 Our experience at The Hinds Head was memorable. Emma and Robyn went above and beyond to cater to our needs. The pub was informal – there was no dress code. The staff were very attentive, and my dad had a lovely birthday meal and The Hinds Head made it a special day for him! Looking forward to coming back soon!

One thought on “Dinner at The Hinds Head, Bray Berkshire”

[Gifted] Treat yourself to some delicious alcohol free red wine @goodstuffdrinks the Very Curious One Shiraz had a lovely plum smell and reminded me of a rich cranberry juice with a cork like aftertaste. With this drink I created a red wine sauce to go along side my steak and wedges, head over to my blog to check out the recipe!
[Gifted] @luckysaintbeer An amazing alcohol free beer that tastes just like alcohol! Using only 4 natural ingredients- no additives or flavourings - pilsner malt, spring water, halletau hops and single use yeast! Only £1.80 in @sainsburys 😲 and vegan!
[PR-Sample] @blueteabox is such a lovely way to treat yourself or someone this Christmas a generous amount of tea leaves in each pouch and who doesn’t love discovering new flavours?! Along with Rooibus Coconut & Turmeric, Sweet Orange we received a third pouch a Good Mood and Memory tea!

Personal Development with a Psychotherapist

Australian Traveller that loves to "Roam" our globe, creator of ENDLESSROAMING.COM sharing the experience through word and photography. Currently residing in my home of Newtown Sydney