Looking for a chocolate fix?! Look no further than Mummy Meagz! A brand that provides you with the ultimate rocky roads. They come in 4 delicious flavours – original, mint, orange and sea salt & cinder toffee, what makes them different? Everyone can enjoy these tasty treats! They are free from dairy, eggs, gluten, soya and nuts!

These classic chocolate treats were developed by Mother and Daughter duo, Meagan and Willow Boyle. The pair founded and created a coffee shop called ‘Blondes’, in the village of Cottingham. In 2016 they made the brave leap of turning their cafe into a vegan eatery – it was the best decision they made as their business boomed. Enjoying being vegan, Meagan started making homemade sweet treats for their cafe.

In 2017 Mummy Meagz’s Vegan Kitchen was born, selling rocky roads in independent stores nationwide and online. We were lucky enough to be sent a box of samples to try. Claire (the real vegan) was excited to try them with me – she was delighted by how tasty they were, she ate 2 and half bars in one sitting!

Orange – it smelt divine, it reminded me of the orange quality street chocolate, a rich chocolaty orange taste with bouncy marshmallows on top, combined with crunchy biscuits – delish!

Sea salt & Cinder Toffee – when I first opened the packet a whoosh of sweet toffee hit my nose and when I took my first bite the chocolaty sensation was unbelievably good! It was like a crunchie bar packed full of the best ingredients, chewy vegan marshmallows with dark belgium chocolate and hints of salt!

Mint – it smelt like my childhood favourite, After Eights, this was also a delicious treat and I enjoyed the gluten free biscuit with the consistent light marshmallows, it definitely hit all the right spots.

Original – is much more chocolaty than the rest, with crunchy biscuits throughout and topped with delicious marshmallows. What more could you ask for? 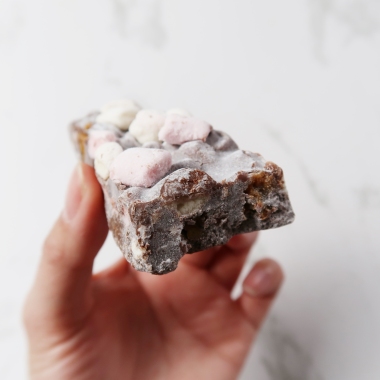 These were heavenly! It’s rare to find delicious vegan chocolate treats as some can be a write off, but I definitely recommend Mummy Meagz – my favourite out of the 4 has to be the sea salt & cinder toffee. I just love the extra surprise – the honeycomb like crunch but with all the extra goodness that make a classic rocky roads, it was so moorish! I strongly recommend trying them if you haven’t already done so, you won’t regret it! They are only £1.49 at Holland & Barrett, and whilst you’re at it check out their vegan creme eggs ‘Chuckie Eggs’ only 99p! (which I have bought ready for Easter).

*Disclosure: The products in this review was provided by Mummy Meagz – The Indulgent Vegan Kitchen on a complimentary basis.

The Psychology behind Holistic-relational therapy

Stuck in Sydney and posting old photos I've taken with various camera phones over the years. To make it more interesting, now in Black and White with sarcastic commentary.